Microsoft Office 2013 is one of the office suites with the largest number of users that exist today, this being the main reason why many people try to acquire it in different ways and modalities.

Because Microsoft Office 2013 It is the best paid office suite in the world (according to many comments), its developers have had to place certain restrictions when it was officially activated. If a user has achieved it and does not comply with the respective procedures, said activation will never take place. In any case, those who have legally acquired it have found an error in this activation, a situation that theoretically is very easy to solve and that we will indicate in this article.

There are some situations that seem to go out of hand with Microsoft, something that later has to be corrected by each of the users of its operating system and also, of each of its products. Those who have registered the error when activating Microsoft Office 2013 suggest that it can be corrected from the Registry editor itself, following the steps below:

Related article:
How to find out which version of Microsoft Office I am using 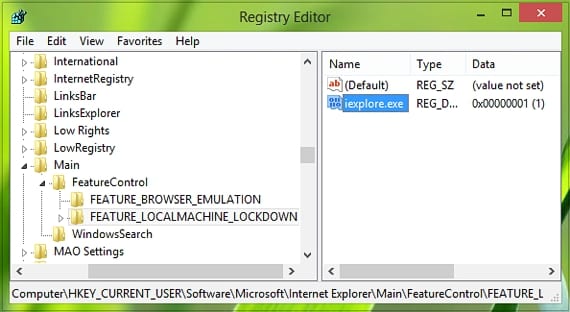 The image that we have placed previously shows the place and location where we will have to go to correct the value of said key, DWord that must have a value of "1" (it could be in "0"), so the error would be practically solved in Microsoft Office 2013, obviously having to accept the changes in each and every one of the windows so that the changes are correctly registered.

The process for activate Office 2013 on Windows 10 It is exactly the same as the one exposed in the previous case. The only difference is in the way you access the registry editor in Windows 10, but we will tell you how to do it in the link that we just left you.

Related article:
How to install MTP drivers to Windows 10

If you have an original license for the Microsoft office suite, you will not need the Office 2013 activator since this type of software is only used if you have downloaded the programs for free and have not paid to use them.

The content of the article adheres to our principles of editorial ethics. To report an error click here!.

It may interest you

News in your email

Get the latest Windows news in your email